It makes the process of setting up a Virtual Private Server simple and fast along with the option to scale it easily if you get traffic.

We use it to host all of our websites here Leader Internet at so we are obviously in favour of the service. This means we can give an honest Digital Ocean Review that goes over its features and functionality from a developers perspective without any fluff or sales pitch.

If you’ve read mixed reviews or are considering it and can’t make up your mind, this review of Digital Ocean contains all the information you need to decide if it’s the right Cloud Hosting for you.

Digital Ocean is a US cloud hosting company tailored exclusively for developers.

It was founded in New York back in 2011 by Moisey Uretsky, Ben Uretsky, Jeff Carr, Alec Hartman and Mitch Wainer.

Their model is to create a hosting platform aimed at the needs of tech savvy developers rather than bloggers or small business owners. Their service is simple and they don’t promise the world but they deliver big time on the features they do promote.

Since creating its first server in 2011, the company has grown at a rapid pace to over 550,000 developers. Notice they say, developers, not customers.

They are one of the most reliable and trusted cloud hosting platforms in the industry with close to 100% uptime and no hacks or compromises reported. 4/5 people who reviewed Digital Ocean gave it top marks in all categories.

Here's a quick animation of how easy it is to set up a server, taken from the DigitalOcean.com homepage:

Digital Ocean offers a variety of services with the core feature being servers. 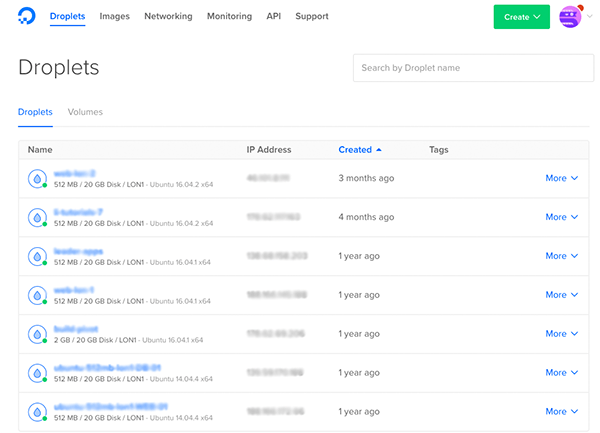 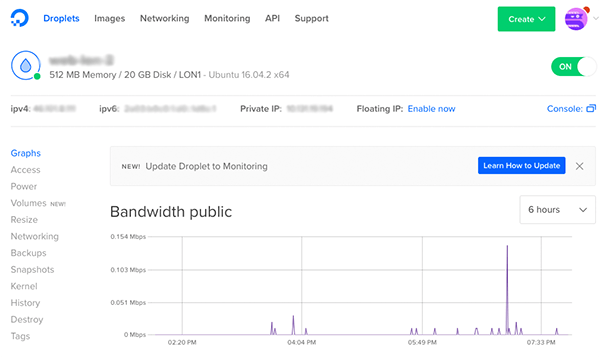 Getting started is fast by signing up for an account. You can then create a droplet from within the backend that can be any one of Ubuntu, FreeBSD, Fedora, Debian, CoreOS, CentOS.

Next, select the size, server location and give it a name. That is all that is needed to create your first Digital Ocean server. It takes about five minutes to complete and you receive an email with the login credentials once complete.

At that point, you have SSH access to go onto the server and configure it as you wish.

One area we had problems previously though, was trying to create separate web and database servers and then get them talking to each other. This was a difficult process and one that you will encounter if your site needs to scale.

Our recommendation is that you sign up for an account and then use a third party server management app like Laravel Forge so everything can be done through a nice tool. It allows you to setup droplets, manage the NGINX configs, install repositories, add SSL’s and create databases, all within their nice dashboard. This would be a good choice for a beginner that may not be comfortable on the command line.

Summary - Controllable via backend but easier with 3rd party GUI

When setup is complete, managing the server is a simple as can be. You have SSH credentials as mentioned and FTP access to deploy code easily. These are the two best features as they make debugging a hell of a lot easier than if you are just guessing what the server state looks like on shared hosting.

A lot of things can also be controlled from the Digital Ocean backend if you are not comfortable SSH’ing onto a server or have your project set to auto deploy code from your repository.

Laravel Forge or any server management tool will allow you to do everything you need through a GUI and recreate the feel of cPanel if you have used that before.

Summary - Good but no live chat

When reviewing the Digital Ocean help section, you will find that support comes in two flavours.

You can check the community forums, which are surprisingly dense and contain answers to most common problems.

If an answer can’t be found there, the second option is to raise a support ticket. The engineers who reply are very helpful, understand technical problems and go beyond their remit when trying to solve issues.

For example, we had problems in the past when DNS wasn’t configured correctly on CloudFlare but the Digital Ocean support agent helped us diagnose and explained how to fix on the CloudFlare interface, even though that was a tool outside of their control.

One downside is that there are no live chat or phone options, at least not on the plan that we have. This may be a deal breaker for big companies or someone running business critical applications as response times over email are generally an hour or two, which is not fast enough in the event of a production outage.

If you can tolerate support that isn’t real time though, you will be just fine with Digital Ocean.

Pricing is where Digital Ocean stands out from the pack. The base droplet costs $5 per month, which provides a server with 512MB of memory, 1 CPU and a 20GB SSD Disk.

When it comes to hosting you may be accustomed to ads tricking you with cheap monthly prices, only to find that they have nowhere near enough capacity to serve your site at a decent speed. This usually comes with a feeling of regret for not reading the small print.

There's no need to review the Digital Ocean terms and conditions however, as you really can run a production site with noticeable traffic levels off the base 512MB droplet.

Leader Internet is a mid sized web development services company and we run some of our own sites on 512MB droplets without ever having poor server response times, slow webpages or downtime.

Digital Ocean offers 99.99% uptime with lost time being credited back to your account at the hourly rate incurred. In practice though, we've never had downtime long enough that Pingdom was able to spot and it hits the sites every 60 seconds!

Like any Web Development Agency, we're not afraid to admit that on rare occasions we've pushed changes that took a site offline temporarily. However, it was always our fault and we've never had any downtime or slowness caused by the Digital Ocean network.

As mentioned above, we run some of our sites on 512MB droplets but also have a few 2GB servers with 2CPU’s. From the time we started hosting our sites on Digital Ocean, we’ve never had performance problems and always scored over 90 on PageSpeed. That includes sites we have on 512MB servers with no caching and decent levels of traffic. At all times, Digital Ocean’s servers are fast without any downtime.

One of the main reasons for this is that they have data centres all over the world including Amsterdam, Bangalore, London, Frankfurt, New York, San Francisco, Singapore and Toronto. This means that no matter where your users are located, there's a good chance Digital Ocean has a node close by that can serve them.

In addition, they offer load balancing with a few clicks so if you have high traffic levels in one region, you can spread the load over a few servers. There is very little manual work required and it provides instant performance improvements for high traffic domains.

Finally, we put CloudFlare in front of our high traffic portals to keep load on the origin server low but even without it, the performance is always good.

Note
We have an unfair advantage in this regard as we are experts in Web Performance Improvements so can squeeze more out a server than regular Web Development companies.

Digital Ocean is developer's dream and an excellent choice for anyone looking to move on from shared hosting.

Setting up a server is quick and deploying a site is straightforward. You have the power of SSH access or can stay within the GUI by creating new droplets and installing apps from the predefined list.

Third party server management tools exist if you are uncomfortable cd’ing around on a production box and lots of documentation exists on their community portal.

If you've used Digital Ocean, let us know what you think in the comments below. We respond to all posts.

Great review. I would actually give setup a 7 out of 10 because there are detailed guides on the DO community portal explaining how to install it on all versions of Ubuntu.

I am considering moving from GoDaddy to Digital Ocean and this guide helped a lot. Nice insights.